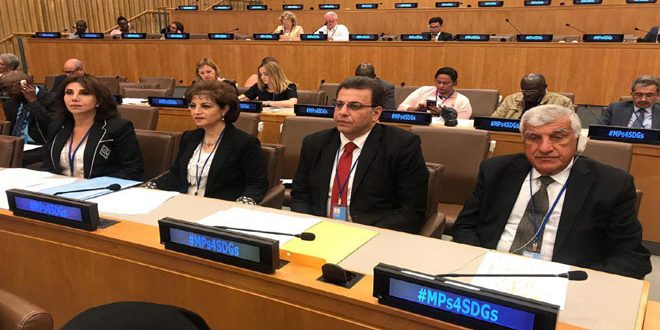 New York, SANA-A delegation from the People’s Assembly on Monday participated in the main session of the Parliamentary Forum which is being held on sidelines of the High-level Political Forum for Sustainable Development at the UN headquarters in New York.

The session discussed the main topic of the High-level Political Forum which is the “Empowering People and Ensuring Inclusiveness and Equality” and the role of the parliaments in implementing the agenda of the year 2030 of lasting development,.

The basic challenges and obstacles facing the states and the nations while they are seeking to reach the economic and social development was also on the table.

President of the Inter-Parliamentary Union (IPU) Gabriela Barron, during the opening of the session, affirmed that achieving the goals of the sustainable development is a participatory operation for which the government are responsible meanwhile the parliaments should develop the legislations and supervise their implementation.

Barron underlined the importance of establishing real partnerships with the private, academic and educational sectors.

For her part, MP Sanaa Abu Zaid shed light on the importance of the parliamentarians’ role in representing the rights of people and their needs and aspirations for realizing peace, security and prosperity which form the main bases of implementing the sustainable development on the agenda of the year 2030.

Abu Zaid presented a briefing on the fierce terrorist war waged against Syria which have caused a huge destruction to the infrastructure and the environment and sought to undermine the developmental achievements realized by Syria before the war.

She  indicated that the terrorist war waged against Syria have caused huge damages to the production sectors, adding that this war came in parallel with imposing unilateral coercive economic  measures on the Syrian people which have been up to the level of the economic siege.

Abu Zaid affirmed that the unilateral coercive economic measures, the support provided for terrorists and the foreign occupation will continue to threaten and block any efforts exerted by the international community for achieving the sustainable development.

On Saturday, the Parliamentary Forum which the International Parliamentary Union called for holding as a part of its contribution to the High-level Political Forum for Sustainable Development started activities at the UN headquarters in New York with the participation of a delegation from the People’s Assembly.

The High-level Political Forum for Sustainable Development is held under the auspices of the UN Economic and Social Council under the title “Empowering People and Ensuring Inclusiveness and Equality”. 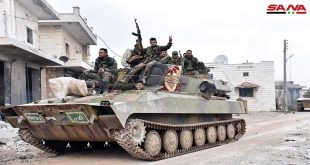