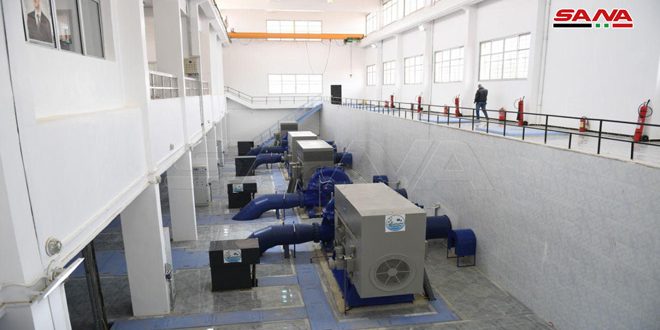 Aleppo, SANA- Ministry of Water Resources on Monday put al-Khafseh and Maskaneh Gharb plants for pumping drinking water into service after rehabilitating them due to the damage inflicted on them at the hands of terrorists.

Following the inauguration of the pumping hall project of the 4th project, the second phase in Khafseh plant, Minister of Water Resources Hussein Arnous underlined the importance of the project which carried out on al-Assad Lake on the Euphrates River. 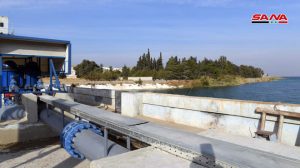 The project includes a pumping station with all its of accessories, which are four water pumping groups, each one pumps 4,500 cubic meters of water per hour, and a power generation group with a capacity of 2 mega (M) to run these pumps, Arnous added, indicating that the cost of this project is estimated at SYP 4.100 billion.

After the rehabilitation of water outlet and Maskaneh Gharb plant for pumping drinking “al-Assad facility” into service whose total capacity estimated at 14,000 cubic meters of drinking water, Minister Arnous pointed out that the joint plant project in Maskaneh Gharb is a water outlet for irrigating Maskaneh city and the villages surrounding it. 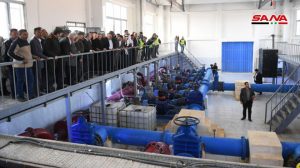 The project consists of 3 pumps on the Euphrates River, each of which has a capacity of 325 cubic meters per hour, and these pumps pump water into the filtering plant, which has recently been rehabilitated, Arnous went on to say.

He added that 6 pumps are ready to work and two plants for washing the filters, noting that the cost of this project is estimated at SYP 960 million.

The Minister stressed that the water network inside Maskaneh city and the surrounding villages has been rehabilitated.

For his part, Director General of the Drinking Water Company in Aleppo Yousef Kurdiyeh said that al-Khafseh project is one of the important and strategic projects as it consists of four pumps which pump 18,000 cubic meters of water per hour to Aleppo city.

Kurdiyeh indicated that the project of Maskaneh Gharb also provides water for 80 villages in the countryside of Maskaneh city, adding that the project includes 3 pumps which pump water into filtration basins and from them into a tank with a capacity of 1000 cubic meters and later the water is sanitized and pumped to the houses.

For his part, Head of the Treatment Plants at the power generation plant of al-Khafseh, Hassan al-Haji pointed out that the station was supplied with four pumps and three diesel groups. 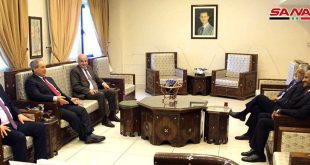