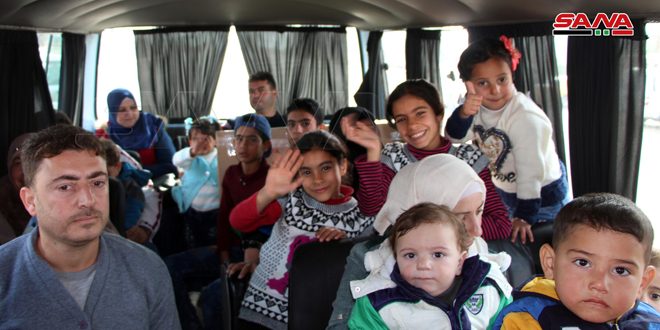 Daraa, SANA- A new batch of displaced Syrians have returned to their cities and villages which have been liberated from terrorism by the Syrian Arab Army in the provinces of Daraa and Homs coming from the refugee camps in Jordan.

Colonel Mazen Ghandour, Head of the Immigration Department, said in a statement to SANA reporter that “The center has provided all the needs of the families which have returned to the homeland to facilitate their return to their areas through preparing a bus for transporting the displaced and an ambulance.”

He indicated that the number of the returnees through the center since its opening has reached up to 31,200 persons.

In statements to SANA reporter, Fatima Shahin from Homs, expressed happiness over her return to her homeland after being forcibly displaced for years.

Meanwhile, Amani Smadi from al-Sheikh Miskeen in Daraa countryside expressed happiness for her return to her city which she left four years ago.

Quneitra, SANA- a military source announced that the Israeli helicopters launched a missile aggression on …