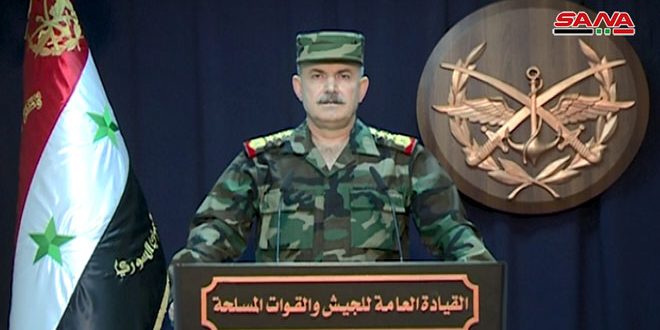 Damascus, SANA- The Army and Armed Forces General Command announced regaining control over many villages and towns in Idleb southern countryside after inflicting heavy losses on terrorists in the personnel and equipment.

The Army and Armed Forces General Command said in a statement on Wednesday that the Syrian Arab Army units operating in Idleb southern countryside “continue to make qualitative field achievements, and to inflict heavy losses on terrorists in the personnel and equipment.”

The statement added that “Over the past few days, our brave soldiers have been able to establish control over many towns, villages and strategic hills including Rakaya Sajneh, Ma’aret Mouqes, Kafr Sajneh, al-Sheikh Mustafa, Ma’ar Zita, Hass, Ma’aret Harmeh, Kafranbel, Ba’rbou, al-Dar al-Kabira, Shinshrah, Deir Sonboul and Hazarin, after eliminating large numbers of terrorists and cutting their supply routes.”

The statement added that the importance of the new liberated areas comes from the fact that they represent the “fortified depth for armed terrorism” in Idleb southern countryside and they link Shahshabou mountain and al-Ghab Palin on one hand, in addition to linking the countryside of Hama and Idleb with al-Zawyia Mountain and al-Arbain Mountain with al-Ghab Plain on the other hand.”

In its statement, Army General Command reaffirmed that “the army will continue to carry out its sacred national duties and its determination to liberate all the lands of the Syrian Arab Republic from terrorism and its backers and to eliminate it completely.”