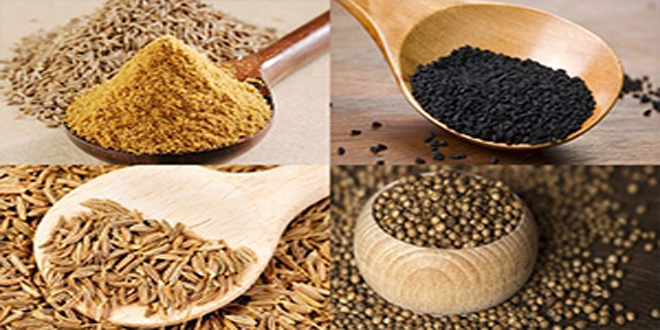 Damascus, SANA- With a little care and coordination among the authorities concerned, the Syrian medicinal and aromatic plants could be turned into a big income for the Syrian economy and reserve an important place in exports through benefiting from the existence of 300 species in Syria. Most of them are used in the medical industries as Ministry of Agriculture sets four species on its priority; which are cumin, anise, black seed and coriander.

Eng. Hitham Haider, the Planning Director at Ministry of Agriculture, told SANA that those species receive the necessary care by the ministry which expands the planted areas, and contacting with authorities concerned to be briefed about the volume of production and use different species in the manufacturing and packaging operations, as well as exporting the surplus quantities.

Haider added that the medicinal and aromatic production for the current season reached at nearly 75,000 tons, most importantly are the Cumin with 41 thousand tons, the black seed with 23 thousand tons, the anise with about 5900 tons, then coriander with more than 4800 tons, and the fennel by just 181 tons, in addition to a modest quantity of sumac and thyme.

Farmer Anwar Abdallah Falah, from Hasaka, pointed out that the cumin season is one of the newly- created seasons on which Hasaka citizens depend in economy.

For his part, eng. Abed al-Muen Kadamani, Director of Plant Production at the Ministry of Agriculture, said that the most important aromatic plants in Syria; which are (cumin, anise, black seed, coriander and the fennel) are exported, particularly cumin and anise species, and there is a turnout to plant the aromatics by the farmers due to the decrease of the agricultural operation costs in comparison with the rest of the crops which their planting depend on the rain completely.

Kadamani revealed that the current season has witnessed an increasing rate in the planted areas with the medicinal and aromatic plants by a percentage that surpassed 130 %, as the planted areas reached by nearly 100,000 hectares out of the plan estimated at 76000 hectares.

Eng. Shouaib Karem, on his part, said that investment in the medicinal and aromatic plants is considered to be a profitable project from an economic point of view, as those species spread naturally in different areas without the need to the necessary agricultural operations for the rest of the crops, adding that the production could be exported abroad and it could be locally marketed.

In turn, Eng. Omar al-Shalet, Member of the Federation of Syrian Chambers of Agriculture and Chairman of the Association of Exporters of Vegetable Products, said that the importance of the medicinal and aromatic planting comes from the fact that it constitutes a natural pharmacy and a national resource that supports the national economy in general by exporting the products of this agriculture.

Al-Shalet concluded that good quantities of the natural medicinal and aromatic crops have been exported to more than 30 countries; including India and Gulf countries, adding that Damascus Chamber of Agriculture offered certificates of origin to export more than 5,000 tons with a value of nearly USD 8 million during the first half of the current year.

2020-09-15
nisreen
Share
Previous Albarkieh in Safita.. a charming resort that smells basil
Next A child martyred, father injured in a landmine blast left behind QSD militia in Raqqa countryside