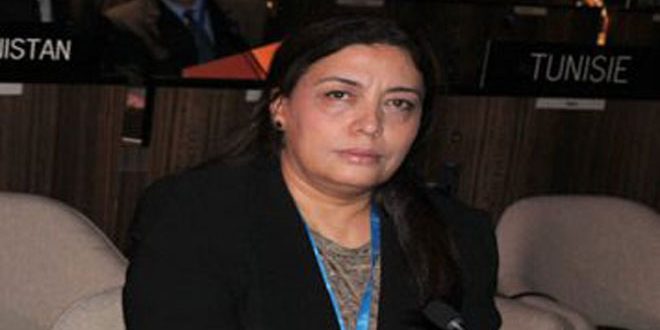 Paris, SANA- Syria’s Permanent representative to UNESCO, Ambassador Lamia Shakkour stressed that the hostile states against Syria and through their flagrant interference in its internal affairs, occupying parts of its lands and supporting terrorism in it are targeting to obliterate the national identity of the Syrians and eradicating the intangible cultural heritage in Syria.

Speaking during the activities of the eighth session of the General Assembly of the States Parties to the Convention for the Safeguarding of the Intangible Cultural Heritage 2003 held recently in the French capital of Paris, Shakkour pointed out that the unilateral coercive measures, imposed by the US administration and the EU countries on Syria, have directly affected the work domains of the Organization, the standing cooperation in the framework of the Convention for safeguarding the heritage as well as they have had disastrous impacts on the Syrian cultural heritage.

Shakkour  said that Syria welcomes the reformative efforts of the Convention for the Safeguarding of the Intangible Cultural Heritage, particularly that are related to and specifically those related to the systematic inference uncover the ties between the intangible cultural heritage and the goals of the sustainable development .

She hailed the global program for building the abilities of the safeguard intangible cultural heritage whose bases have concentrated on the educational sectors.

Shakkour also appreciated the quick and efficient respond of the Secretariat of the Convention to support Syria’s national efforts in combating the repercussions of the spread of Coronavirus, noting that the Syrian government’s support for the efforts of the world’s  countries to confront this epidemic and its catastrophic impacts.

Shakkour indicated that the cooperation among the UNESCO and the Convention’s  Secretariat and the Syrian  Culture Ministry and bodies of local community yield a qualitative leap and large steps in raising the individuals and societies’ awareness of the importance of preserving the heritage and establishing local, national and international partnerships in this regard.