Geneva, SANA- Interpositions of the members of the national delegation to the meetings of the fourth round of the committee of discussing the constitution in Geneva focused on two basic national principles, mainly the humanitarian file and lifting the illegal sanctions imposed on the Syrian people.

As for the issue of lifting sanctions, the Interpositions affirmed that since the beginning of the war, countries hostile to the Syrian people have used the weapons of terrorism and sanctions to break the will of the people and force them to accept the schemes outlined by those countries for our region, and they are going ahead in these policies despite their clear impact on all aspects of Syrians lives.

Members of the delegation went on to say that any Syrian-Syrian meeting working within the national framework today should send a clear message that sanctions should be lifted immediately, which would help the Syrian refugees return to their homeland and contribute to its reconstruction.

The fourth round of the meetings began in Geneva yesterday as the national delegation stressed during the first day the necessity of adopting the issue of the return of refugees as a comprehensive national principle because of its importance at various levels, especially at the humanitarian level. 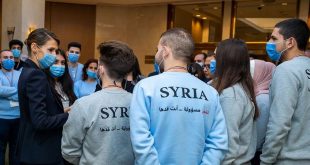 Damascus, SANA-Mrs. Asma al-Assad said that the rise of the countries wouldn’t be achieved except …